The Pana Rhododendrons are doing very well.  I put acid around them last summer and that has made them very happy.  My soil is quite alkaline.

The old spirea is still going strong, and the Francis Williams hostas are holding their own despite the fact that they are surrounded by trailing arches of white.

I was surprised to see one of the catmint (Nepeta subsessilis–Cool Cat) had a couple of small blooms.  These usually appear on longer stalks, but I’ll take this little guy because he is the promise of many more blue blooms later.

Also in bloom are the Michael McFarland lilacs.  I worried about these last year.  I got them at the end of the 2008 season at bargain basement prices at a garden center, then transplanted several of them last summer.  I was worried they would just get tired of the shock, but it turns out they are joyously blooming.

I wish my other lilacs bloomed this much this soon after finding their home in my garden.  Alas, I have to wait a few more seasons.  In the meantime, I’ll enjoy the Michaels and their sweet fragrance.

Near the lilacs is the big old dogwood.  It’s blooms look like those of a red twig. It may be as old as the house, which means it got its start in the 1920’s.  The old girl makes a perfect backdrop for the Garden Lady statue.  In the distance behind the Lady are the Cheddar Pinks that have been planted and transplanted several times.

Old dogwood in the secret garden 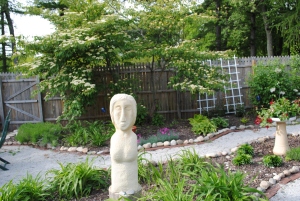 The Lady and the dogwood

One delightful surprise is the amsonia x Blue Ice.  I bought five of them at the end of the season last summer, for a dollar each.  They are charming and I’m sure will put on more of a show in about a week.  But a bloom is a bloom!

The Bleeding Heart (dicentra) are starting to fade, but one tendril of blooms trailed over the hat of this little statue that was a gift when I retired from public school teaching.  I bought the plant at Meijer Gardens two years ago.

Behind this little girl is a “wall” of Virginia Creeper.  I have begun the almost daily battle to keep it at bay.  At one time it completely covered the old fence that used to separate my yard from the park.  Now it only grows on the chain link fence that separates my yard from my neighbor’s.  I chop it.  I dig it up.   The only thing I can’t do is ignore it.

The first of the Heuchera are blooming.  This one is actually not a true Heuchera, but a cross between Heuchera and Tiarella–Foamy Bells.  I like the contrast on the leaves, and it sits well with the Heurcheras that I planted between the boxwoods and the brink entrance way.

And in the secret garden, the columbine (Winky Blue) are still blooming.  They were another end of the season buy.  I love those!

The Hansa roses are just getting starting and sending up their first fragrant bloom. Below are Wildberry Breeze and Wild Spice.

I want to thank May Dreams Garden for creating Bloom Day.  A friend told me about it just last week, I think, and went home and began a Google search.  It didn’t take long to bring up May and Blotanical.  I’ve been happily looking at garden blogs ever since.

If you’ve gotten this far, then scroll down just a bit more to see the Hansa roses.  I love these guys!!  They are impervious to pests, with, perhaps, the exception of Japanese Beetles.  But they never get black spot, something that dogs the other roses in the medalion.  And they smell so good! 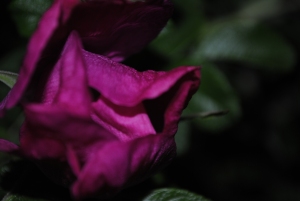