My wonderful neighbors brought the large center stone back from a trip out east where it sat in a stream that ran below a wooden covered bridge. It is now at the entrance of the Secret Garden. Surrounding it are Petoskey Stones that I picked up on a beach in Leland, Michigan.

When I first envisioned a Secret Garden in my very urban back yard, I saw brick pathways and green walls, or, actually, English manor-type stone walls with ivy.  I knew the stone walls weren’t going to happen.  A friend suggested I plant dutchman’s pipe on wooden supports and soon after that I hired a handyman to put up the supports.  My friend didn’t mention that dutchman’s pipe is very invasive and that I would need to spend a lot of time just keeping it in check.  I do that, not gladly, but with the understanding that if I do not regularly pull up new vines, I would have nothing but dutchman’s pipe growing in the Secret Garden.

This little medallion marks the spot where the two paths in the Secret Garden diverge. At the top is the entrance to the garden.

So I called a landscaper.  He came and took some measurements. We talked about brick color, and I thought by the end of the summer I would have perfectly presentable brick pathways.  But then I mentioned my idea to a good friend who lives in Maine who just happens to be unemployed this fall.  She had installed brick pathways in a garden she once had in Michigan and said that if I flew her to Grand Rapids, she would install the pathways.  I jumped at the chance.  I wondered how I would explain to the landscaper that I was no longer interested, but he never got back to me with an estimate.  And, the friend who suggested the dutchman’s pipe and the crushed limestone had a neighbor who needed to get rid of about 1400 bricks that had once been a retaining wall.  A few weeks later, the bricks arrived at my house.  And a few days ago my friend from Maine arrived. 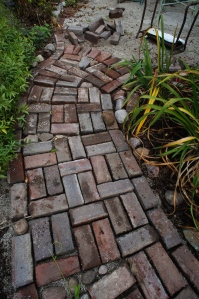 This path leads to a circular sitting area where I had a table and chairs.

The large circular area is starting to emerge. I’m thinking that the table and chairs should go somewhere else and that I should put the curved teak bench and a couple of teak chairs here.

Because I have always been in love with rocks, my friend from Maine, who has been given free creative license, decided to use both stones and bricks.  I saw some stone mosaics online that she found particularly inspiring and so the project began. We are learning as we go, about design and materials.  For example, we now know that we should not use very small stones.  The design gets too busy.  So, the early work that my friend did will probably have to be redone.  Plus, I now know what polymeric sand is and that mortar works far better than cement for stone mosaics.  I’ve learned I can carry four bricks at a time and that it takes a lot of trips to move 1400 bricks.  I’ve learned that sand weighs a lot and I’m not as young as I used to be.  But the walkways are beautiful and all the more special because my friend from Maine laid each brick and rock.

This afternoon we decided that the little table and chairs that sit in the circular area in the back of the garden should go elsewhere and that the curved teak bench in the entrance garden would be a lovely addition to the flowing brick and stone circle that is gradually emerging.  I think one of the things I love about this project is that nothing is planned out.  My friend doesn’t know what she will do next.  She just feels her way along, letting the bricks and stones and pathways guide her.  There’s a metaphor here.

Another view of the sitting area and the “movement” of the bricks.

The stones and meandering bricks create a lovely sense of movement.

1 thought on “And the Pathways Begin”