I used to know a woman whose mother was a war bride from England. On the first day of every month she would say “white rabbits” for good luck. I don’t know if this is an English custom, or whether it was just something her family did.  Regardless of the origin, it can’t hurt to say “white rabbits” today.

The weather has been perfect lately. We’ve had rain and sun, the best two combinations for a Michigan garden. The hansa roses are starting to bloom, and all of the roses are covered with buds. I’m eager to see the Falstaff in full bloom. I planted two David Austin English roses, Falstaff and Golden Celebration. They should be magnificent this year, though the Falstaff is my favorite. There are two carpet roses, a Julia Child (something a cook couldn’t possibly pass up), and a Fabulous. A friend gave me a Fabulous several years ago and it did very well in my old garden. I had thought about digging it up and transplanting it someplace at the Grand Rapids house, but I was so overwhelmed with the move and by the state of the yard here that I just left Fabulous to fend for itself. And, the new owner bought the house because of the garden. It didn’t seem right to remove plants from it though I took a clump of day lilies that have a deep red, almost black, flower, and a small hidcote lavender.

Anyway, the White Dawn climbing rose in the front is getting ready to bloom and I must start tying it up to the trellis.  The same is true of the New Dawn climber in the secret garden.

Below are pictures of a corner of the lower garden with the cranesbill in bloom.  Below that is a view of the north side of the secret garden.  The figure of the little girl was a retirement gift from the board of education.  Next to her is the ubiquitous wheel barrow that carries three pots of hidcote lavender and a german statis yet to be planted.  I still have three phlox, the plants in the wheel barrow, two pink lavenders, and a russian sage to plant.  Perhaps that will happen this evening.  Perhaps not.  A friend visited this weekend and we spent our days writing, eating, talking and talking, watching a silly movie, and driving around looking at other people’s gardens.  She gave me some great advice for my book.  If I were smart, I would act on that advice rather than writing a blog entry about my garden.  Still, it so much easier to write about the garden.  And, now that she has left, I may just forage for some left over cheese and fruit and ignore my scholarly duties. 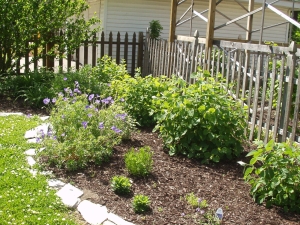