Cool temps and plenty of rain.  That’s the kind of summer we have been having so far as we enter the middle of July.   That means the gardens are green and full of blooms.  Here is what is blooming today on Garden Bloggers’ Bloom Day: July, 2014. 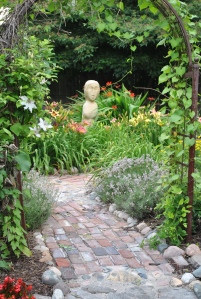 Day lilies, white clematis, Jean Davis lavender greeting everyone at the entrance to the Secret Garden. 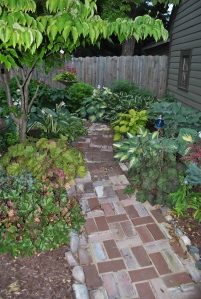 Looking east in the Secret Garden. Great Expectations is blooming.

Rosie Returns day lily on the left, First Knight is the yellow lily across the path, crocosmia near the garden lady. 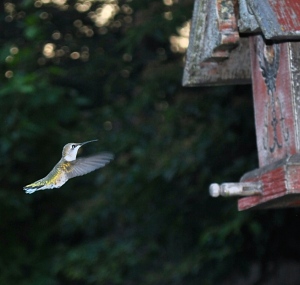 A visitor in the Secret Garden. She is welcome anytime.

The hosta bed in the front garden under the magnolia tree.

Plum Pudding catching an extra petal (and a katydid nymph) 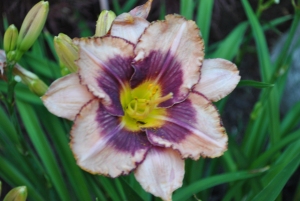 Rosie Returns also wants to go the extra mile and add an extra petal and sepal.

The hydrangeas are doing far better than I expected since the park removed a maple tree that gave them so much shade.

In the Lower Garden, the Zagreb Coreopsis is blooming. I cut back the geranium but it still has some lovely blue flowers on it. That’s Strawberry Candy under the Rose of Sharon.

Crocosmia in the Secret Garden

It’s been in the 90’s here, and high humidity turns that heat into steamy afternoons.  And though there was a lot of moisture in the air, there was no water falling from the sky.  But it rained today.  And while the temperature is climbing again, at least the garden has gotten a nice natural drink.  Watering systems are nice, but nothing works quite as well as rain.  When there was a small break in the rain this morning, I grabbed my camera. 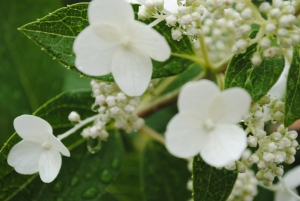 Tardiva is getting ready to bloom.  I’ll soon have white pinnacles nodding above the day lilies.  This was one of the first things I put in the secret garden.  The spent blooms even look interesting during the winter.  But I have to stay in control.  This hydrangea could get huge and crowd out all the day lilies.  I had to tame it a bit a couple weeks ago, nipping branches that hid a couple of Pandora’s Box lilies.

I love the fact that Tardiva blooms at the same time as that dark, dark red day lily.   It makes for a wonderful contrast.

Rhapsody in Blue is starting her second bloom cycle.  I’ve been vigilant about keeping the Japanese Beetles off her.  And a hearty thanks to Jean for suggesting the dish-water method.  I have a jar of soapy water handily placed in the rose garden.  When I find the latest colony of Japanese Beetles, I hold the jar underneath them and shake the flowers.  Yesterday I happily drowned at least a hundred of the hungry little beasts.  There are a couple dozen floating in the jar right now, victims of my latest beetle killing spree.

There are still enough hansa rose blooms to scent the air.  What a wonderful, hardy, healthy, fragrant addition these bring to the garden.  And, I have to admire their spiny canes. 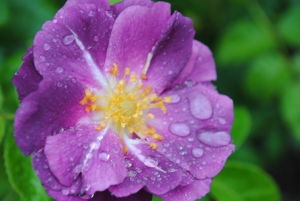 The Rosey Returns day lily near the kitchen window is doing quite well.  And soon the Limelight Hydrangea will bloom.  That was planted about a year ago.  I realized I needed some height at the corner of the house, so I transplanted some of the day lilies and put Limelight there.  It works.

Next year I’m probably going to have to thin the day lilies in that bed.