I didn’t think we were quite ready to see snow flakes, but as I was sipping coffee and reading the NY Times on-line, fluffy white flakes floated past my window.  I still have roses blooming!  I’ve known roses to bloom until Christmas if the weather has been mild.  But it is early November and while many trees still have some leaves precariously clinging to winter-sleepy branches, the leaves won’t last much longer.

My bald cyprus is about to drop its coppery needles. 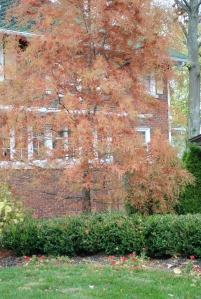 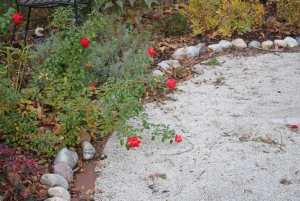 But the big news is that the hurricane force winds we experienced last week blew over the two aluminum arches that form the entrance to the Secret Garden.  The winds snapped one of the “legs” of the first arch, though, it was bent and weak already.  The two different kinds of clematis that arches supported are fine.  But, the weight of the clematis makes the arches too heavy for my to set upright.  I’ve asked a friend to help me, but I don’t know when he will have time.  And, it’s COLD. 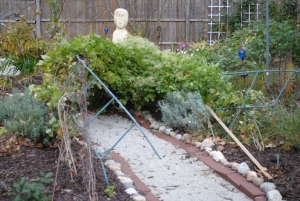 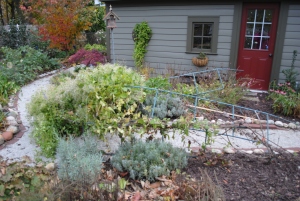 Our high winds lasted two days, actually.  They were preceded by unusually high temperatures for this time of year.  That almost always signals that storms will pass through.  And they did.  In fact, I was doing an advising session with a grad student on the top floor of my building when the tornado sirens went off.  We had to go down to the first floor and wind our way into the interior hallways of the public televisions station that shares my building.  The hallway began to fill with faculty and students who were taking classes, and ultimately a few of us ended up in the green room.  That wasn’t bad at all.  There was cushy leather furniture and a large flat screen television that allowed us to keep up to date on the storm.  We finally got the all clear.  But 15 minutes later the sirens went off again.  So, we trundled off to the first floor again.  I was finally able to finish the advising appointment and go home.  Different winds blew in the following day.  Thunder storm winds come in bursts.  But the second day, even though the skies were clear, the winds blew so strongly and constantly that they almost knocked me over when I stopped to put gas in the car.  That was the day that the arches blew over.

But after that, I knew it was time to take the tricycle rack off the car.  My tricycling was finished for the season.  And today’s snow flurries added the final end mark to that reality.  I tried to ride a stationary bike at the gym earlier this week.  It’s just not the same.  I had hoped to ride for an hour, something that is so easy to do on a recumbent tricycle that goes somewhere.  And even though I was plugged into my IPod and listening to an audio book, I could only last a half hour.