I stumbled on this picture when I was searching through images on an old computer.  It’s a wonder the thing will still boot up!  I think I took it during the second summer I lived here at 337.  I’d just planned out most of what I call The Lower Garden, the section of the back yard that is closest to the house.  I had cleared the “brush” from the “Upper Garden,” and didn’t know yet what I was going to do with it.  I was wishing for brick pathways but knew I couldn’t afford that.  Good friend and voice teacher Dale came to the rescue and suggested crushed limestone paths and added the magic words “I’ll help you.”  But this is what that space looked like before the paths went in.  I see a couple of lime stones that at one time formed a patio.  I pried those up and used them to line the beds in the Lower Garden, but this picture shows that I still had a couple of stones to place.  Actually, from time to time I discover another flat limestone piece when I’m digging deep.  That “upper garden” become the Secret Garden, by the way. 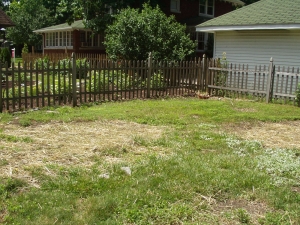