Temps have come down a bit–into the mid-80’s.  And the humidity is better.  I had a little get-together for neighbors Friday night and it was so pleasant in the garden. So, good company and companions make for a lovely evening.

The day lilies are in their glory. But I’m discovering that my record keeping last summer is slightly flawed.  Which clump of lilies is Druid’s Chant?  And why doesn’t Lavender Stardust look like the pictures on the internet? I suppose in the end it doesn’t matter.  They are just as lovely. 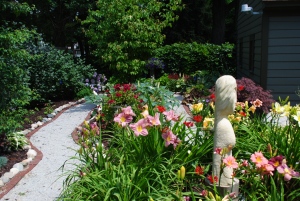 I found this dragonfly resting on a lily frond.

He/she was very patient as I took a picture.

I’m still struggling with the “False Garden.”  I bought the wrought iron bench a couple years ago at the Garfield Park Art Show.  It has sat in a number of different places, none of which has been quite right.  It’s now in the False Garden, and I’m not sure this is the right home for it either.  Perhaps I need to take out the False Lupine and the False Sunflower, move the bench closer to the arborvitaes, and put the lupine and sunflower someplace else.    For the time being, some house plants have taken up residence on the bench.  I moved them out there when I had my concert because they were taking up too much space in the sun room.  I needed seating space.  As it turned out, I needed standing room, too.  Almost 50 people attended.  That’s a lot of audience for my house.

Below are a couple of shots of the Secret Garden this afternoon.  I love the textures.  The white liatris in the west side of the garden is starting to bloom, but the clump on the east near the garage isn’t quite there yet.

Below these Secret Garden images are a couple of before and after shots of the False Garden.  “After” isn’t quite accurate, though.  I have a lot more to do in this garden.

I am, by the way, officially out of those flat limestone rocks that I found in the secret garden that first summer I lived here. They have served me very well.  This picture reminds me that I have to paint that cross piece on the garden gate.

5 thoughts on “Sunny Sunday and Lovin’ the Lilies”