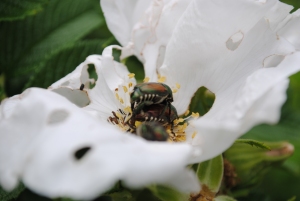 They are doing it right there in the middle of Wild Spice.  In broad daylight. And, you can tell they’ve been snacking between, um, sessions.    It’s too breezy to spray, and I haven’t noticed that spraying does much good.  And, spraying can kill bees.  I’ve tried picking these things off and stomping on them, but they take flight before I can commit beetle-cide.  Anybody have any suggestions on how to minimize Japanese Beetle visitations?  I’ve read that traps only seem to attract more beetles.

The Moonflowers (Datura) are blooming every night now.  This one was completely open last night.  My niece and I craned our necks to get a glimpse of the city fireworks display, but the Moonflowers were really far more impressive.

The old Rose of Sharon is starting to bloom.  Soon she will be full of pink blooms like this.  She’s pretty traditional, but really quite lovely just the same.  I know Japanese Beetles can feast on Rose of Sharon, too.  I’ve never seen them on this tree.  Too bad this robin doesn’t seem to find the beetles appetizing.  He (or she) loves bathing in the fountain which is a mere 12 inches or so from a Japanese Beetle buffet.

Sorry about the blurriness.  I took the picture from the kitchen window and then cropped it.

I do love watching the birds come to the fountain, even when they are only common house sparrows.  The robins, though, love the fountain.  I’ve seen as many as four standing in the water, ducking under and ruffling their feathers.  It’s spa time for robins, perhaps.  Other birds politely sip.  Robins bathe.