It is hot here in West Michigan.  The heat has forced lots of flowers into bloom and it’s safe to assume that no frost will nip them now.  I love the garden in late afternoon when the sun is low.   Clematis x White is blooming and it’s vines are twining nicely with the later blooming variety.  That was a good choice.  I’d like to vines to completely hide the ugly green arches that the previous own left behind.  I moved them to the entrance of the secret garden hoping to create a tunnel effect.  I think it’s working.

I wish those saucer sized blooms continued all summer.  But these will fade and leave interesting, but less charming, swirls.  I will get a few blooms later in the summer, but nothing like the number I get in early summer.  Or, in this case, late spring.

The hostas are going crazy this spring.  I don’t know whether it’s the warm weather, the right amount of rain, or just that they are now mature enough to put on a leafy show.  But I won’t question it.

This Great Expectations, one of four, has been transplanted a couple of times.  It and its buddies seem to be quite happy in the little nook behind the garage.

And, the hostas in the front garden are doing well, also.  I seem to be fond of pairing hostas with heucheras.  The old magnolia provides a wonderful canapy.  And to think there was a hug blue spruce dominating that old magnolia. 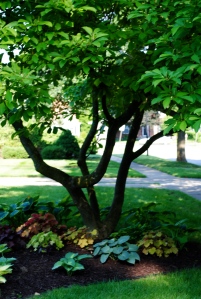 Under the magnolia tree

I struggle, though, to control the snow on the mountain that no amount of pulling, plucking, digging or swearing seems to discourage for long.  And, to my chagrin, I actually thought I was growing a nice mound of astilbe until I say a stalk of buds that did not look at all like an astilbe bud.  Out came the perennial spade and out went the dreaded snow on the mountain.  It is the non-variegated kind.  Hence my confusion.  It is now in the yard waste bin and will become compost.  Good but temporary riddance.   Every time I dig up snow on the mountain I think about postmodern theory and all those little under-the-surface connections.