The white dawn climber in the front is in full bloom.  Rose slugs attempted to do it some harm, but insecticidal soap did them in.  I’m told they don’t really hurt the  plant that much, but they’re ugly, and I’ve waited too long to see white roses climbing up the chimney to trust them to rose slugs. 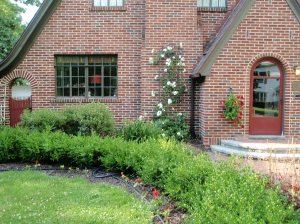 And the clematis is really taking off.  It should completely cover the arches by the end of the summer.  I also planted fall blooming clematis.  I had that in Portland and had to hack away at it all the time because it grew so well that you could barely walk through the arbor.

A wren family has  taken up residence in the birdhouse.  Such a big voice comes out of those tiny birds.  The adults fly in and out of the opening with insect tidbits.  And every once in a while I see one splashing in the fountain.

The hansa roses were fabulous this year.  The English roses don’t seem as vigorous, either by comparison or because the hansas are hardier.  We had such a cold winter, I should be grateful that all of the roses survived.  Fabulous is struggling.  But the carpet roses are ok.  Still, the hansas are tall and their first bloom of the season was full and so fragrant.

I don’t have the fountain up and running in this picture, but that was taken a few weeks ago.  It’s “fountaining” now.

And the white dome hydrangeas are in full bloom.  The endless summers are starting to come out and they are blue, just as I hoped they would be.  Unfortunately the forever and evers are still pink despite the dose of acid I gave them in May. 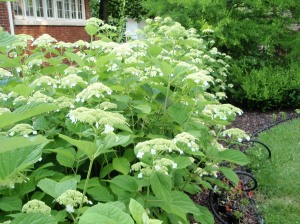 I’ll have to post the hydrangea poem I wrote a couple weeks ago.