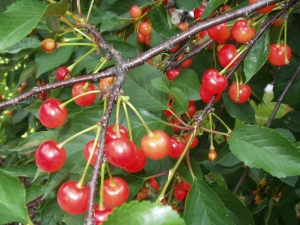 The cherry tree is so laden with fruit that it lost a sizable limb two nights ago.  It probably happened during one of the little thunder storms that moved through the area.  It was resting on the phone lines, which luckily did not snap.  Ron the handy man removed the limb from the wires.  I picked as many cherries from the downed branches as I could.  Some were not quite ripe.  Some were crushed from the fall. My friend Patty came by last night to pick cherries and removed the branches for me.  She thought she could get more cherries from the them, and, she wanted the wood for her fireplace.  That was fine with me.

I have made two batches of cherry jelly so far, and may do at least one more.  It’s a shame to let the birds and squirrels get all those cherries.  But they have to fall soon.  The tree is too old to carry the weight of those cherries for long.  We had a late frost a year ago in April and so last summer’s crop of cherries was thin.  I think the tree is making up for that.

They are sour cherries, great for pies.  That would be nice except that I don’t really care for cherry pie.  And I don’t want to pit them.  For cherry jelly I merely wash the cherries and dump them in a large sauce pan and cook to a pulp.  I strain them in a colander and then follow the directions on the freezer jam sure jell package.    Magic  cherry jelly.