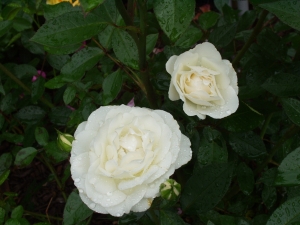 I planted this Fabulous rose bush in the center medallion in the lower garden.

I never thought I would take such joy from growing roses. In the past I’ve spurned them, largely because I thought they were too much work, or too prickly, or too fussy. But when I made the medallion bed in the center of the lower garden and place the fountain there, the space just seemed to call out for roses. I chose several varieties, largely for their scent. One, though, I chose out of nostalgia. A friend had given me a Fabulous rose that failed to thrive in his garden. It seemed to do very well in my garden in Portland. So, when I saw a Fabulous at a garden center in Grand Rapids, I decided to include it in my rose medallion. It isn’t as strongly scented as the hansas and the English roses, but I wanted it anyway.